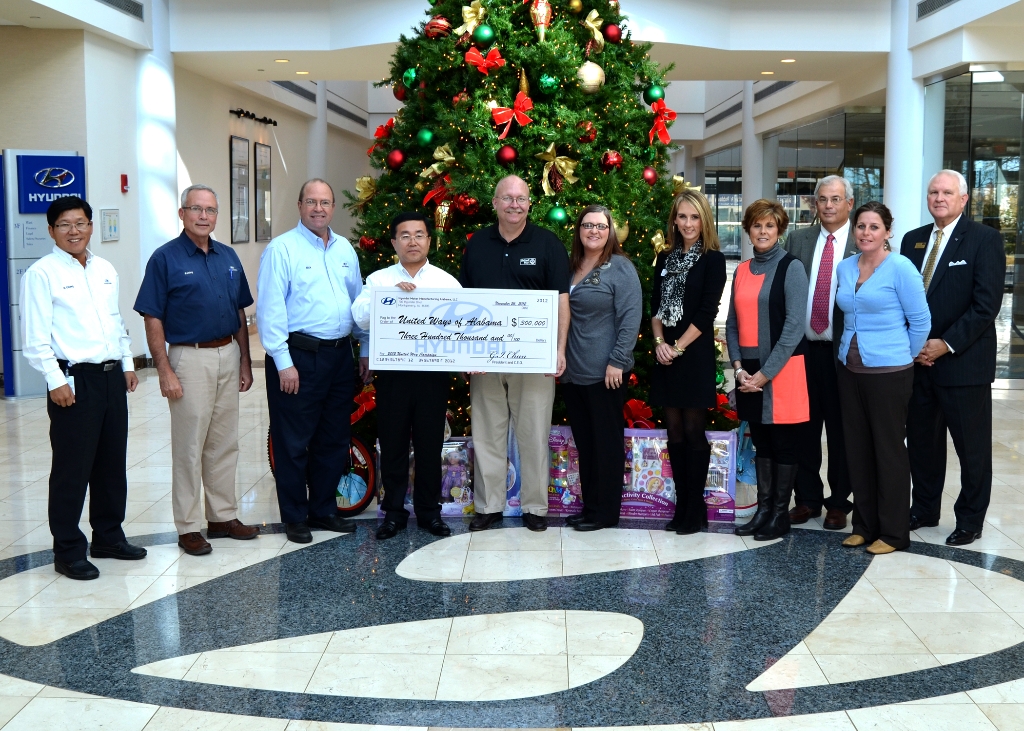 HMMA and Team Members Donate $300,000 to United Ways of Alabama

Hyundai Motor Manufacturing Alabama, LLC (HMMA) and its team members together have pledged over $300,000 to the United Ways of Alabama.For HMMA’s 2012 United Way campaign, team members pledged donations amounting to $238,260. HMMA then contributed a corporate donation of $62,000, totaling an overall contribution of $300,260.

This is the ninth consecutive year that HMMA has held a United Way campaign, and the highest amount pledged by HMMA and its Team Members to date.

“Year after year, I am amazed by the generosity of HMMA and its Team Members,” remarked Becky Booker, executive director – United Ways of Alabama. “The United Ways supported by the HMMA United Way campaign are grateful to these Team Members who are helping to build stronger, healthier and more compassionate communities through their gifts.”

HMMA President and CEO Gui Ill Chun presents a check for 300,000 to representatives from United Way offices throughout the River Region. This is the seventh year Hyundai Motor Manufacturing Alabama has organized a United Way campaign.

Hyundai Motor Manufacturing Alabama, headquartered in Montgomery, Ala., is an independent manufacturing operation of Hyundai Motor Company, based in Seoul, Korea. HMMA currently produces the 2013 Sonata and Elantra sedans. Hyundai cars and sport utility vehicles are distributed throughout the United States by Hyundai Motor America and are sold and serviced by more than 900 Hyundai dealerships across North America.