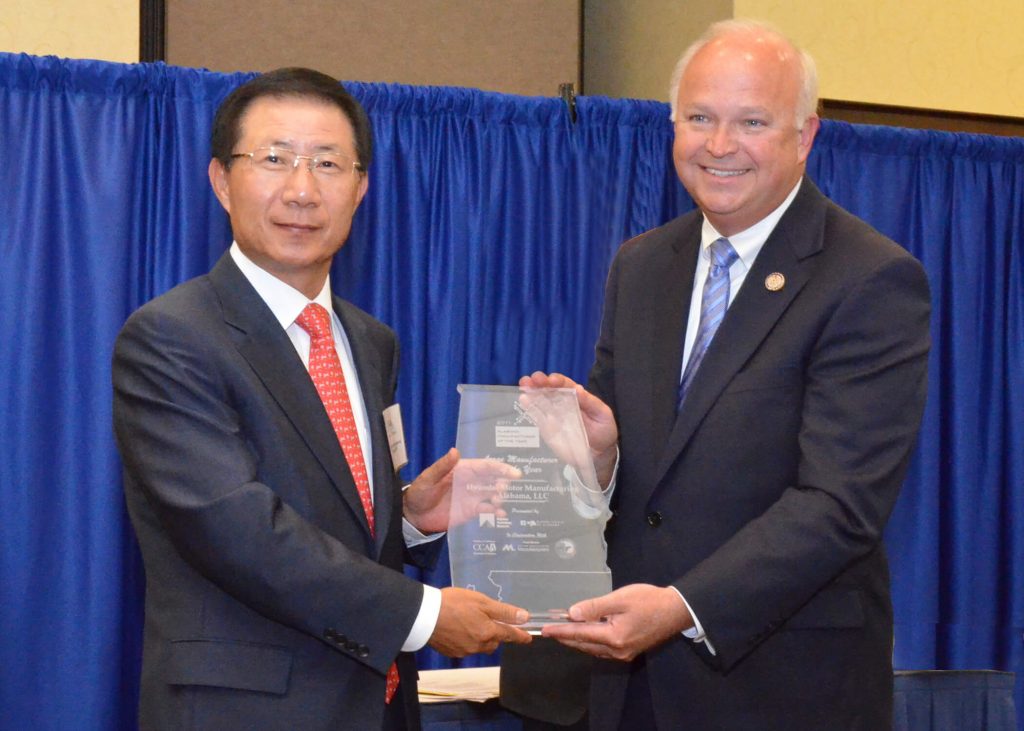 HMMA wins the 2011 Alabama Large Manufacturer of the Year

The awards are put on annually by the Business Council of Alabama (BCA) and The Alabama Technology Network (ATN), in partnership with The Chamber of Commerce Association of Alabama and The National Association of Manufacturers (NAM).

Winning manufacturers are selected by an independent panel of judges who look for demonstrations of superior performance in the areas of customer focus, employee commitment, operational excellence, continuous improvement, profitable growth and investment in training and retraining.

Large Manufacturer of the Year (400 or more employees)

The 2-million square foot Hyundai Motor Manufacturing Alabama facility is one of the most modern automotive assembly plants in the world and is frequently recognized by well-respected trade and consumer publications for its quality vehicles. Hyundai’s Alabama-built vehicles, the Sonata and the Elantra, have been recognized with multiple awards and accolades for various production characteristics including quality, value, safety and design. This $1 billion automotive assembly and manufacturing plant employs more than 2,500 people and is capable of producing 300,000 vehicles per year for the North American market.

The BCA is a non-partisan statewide business association representing the interests and concerns of nearly one million working Alabamians through its member companies and its partnership with the Chamber of Commerce Association of Alabama.  Manufacturers comprise the largest single segment of BCA’s membership.  BCA is Alabama’s exclusive representative of the National Association of Manufacturers.

The Alabama Technology Network is a division of the Alabama College System, partnering with the University of Alabama System, Auburn University and the Economic Development Partnership of Alabama.  The network consists of 14 centers throughout the state to deliver training and technologies to existing industries with the goal of enhancing the global competitiveness of Alabama’s manufacturers.  ATN is an affiliate of the U.S. Department of Commerce’s National Institute of Standards and Technology Manufacturing Extension Partnership (NIST-MEP).

The Alabama Manufacturer of the Year Awards program is an annual recognition of Alabama manufacturing enterprises that exhibit excellence in leadership, performance, profitability and work force relations.  The awards are presented in three size categories to ensure fair recognition of all applicants regardless of the size of their work force.