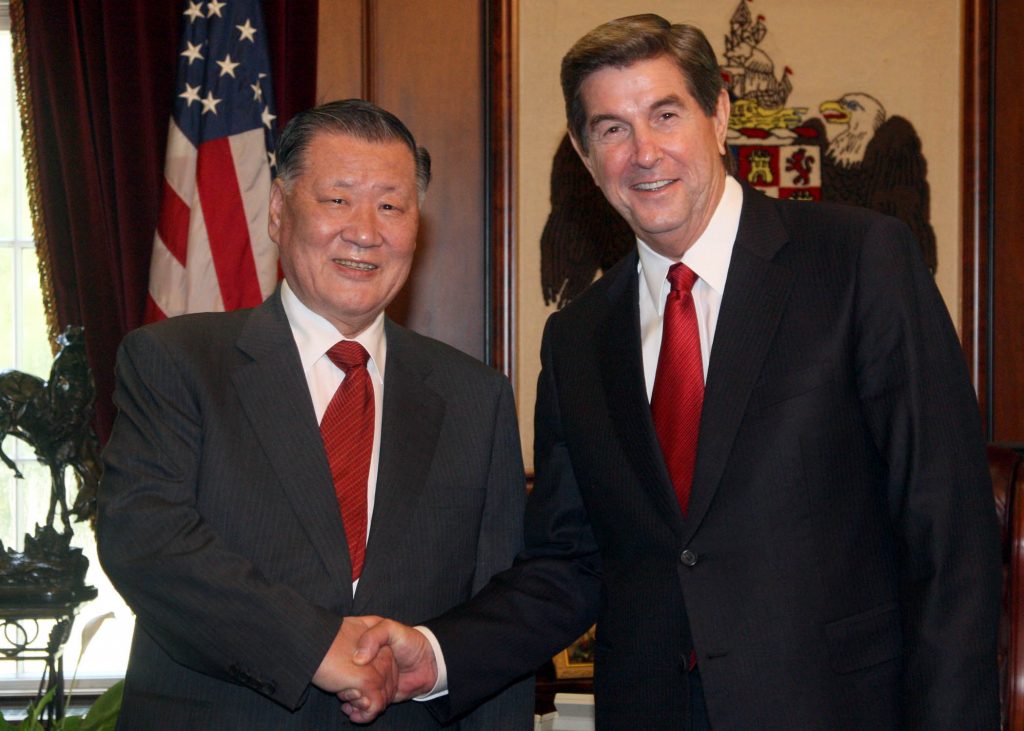 Montgomery, Ala. – Recently, Hyundai-Kia Automotive Group Chairman M.K. Chung met with Governor Bob Riley to discuss plans to strengthening the successful partnership between South Korea and Alabama. Chung also visited Hyundai’s Montgomery, Ala. assembly plant; Kia’s assembly plant in West Point, Ga. and the Hyundai-Kia Design Center at Irvine, Calif.While meeting with Governor Riley, Chairman Chung expressed his thanks to the state of Alabama, “HMMA has been able to achieve the 300,000 unit production capacity goal of the Montgomery plant ahead of schedule due to the interest and the cooperation of the state government and the Governor.”
Since the launch of the 2011 Sonata earlier this year, Hyundai Motor Manufacturing Alabama has been operating at 100% capacity.  Total production at HMMA for the first half of the year was 154,000 units and it should reach 300,000 units by the end of 2010. During the month of August, HMMA Team Members will be working a five-day work week. The two production shifts will be working 9-hours.

Governor Riley stated HMMA was able to reach the 300,000 unit capacity in such a short period of time because Hyundai produces an excellent vehicle such as the Sonata and has gained immense popularity among consumers.  He added, “The growth of Hyundai that I have seen so far is very astonishing and I can’t help but show my respect for that.”

Governor Riley went on to say Hyundai is building the highest quality vehicles in the United States and Hyundai’s expansion to Alabama has greatly contributed to our economic development but, more than that, the diligence and sincerity of the Korean people are teaching many lessons to the citizens of Alabama.

Chairman Chung visited HMMA and the Kia Motors Manufacturing Georgia to closely examine the production facilities and congratulate the Team Members for their continued efforts to build the safest and highest quality vehicles for the North America.

Chairman Chung also visited the Hyundai-Kia U.S. Design Center located in California to compliment the design team of Hyundai and Kia, and encouraged the team to continue to develop vehicles that fully reflects the American consumers’ preferences.

Photo Caption: Chairman M.K. Chung (right) with Governor Riley, during a visit to the U.S. sales, production and design center facilities. He met with Riley on July 30, 2010 at the Governor’s Office in Montgomery, Ala.

Photo Caption: Chairman M.K. Chung is updated on key process improvement projects at HMMA during his visit to the plant on July 29, 2010.