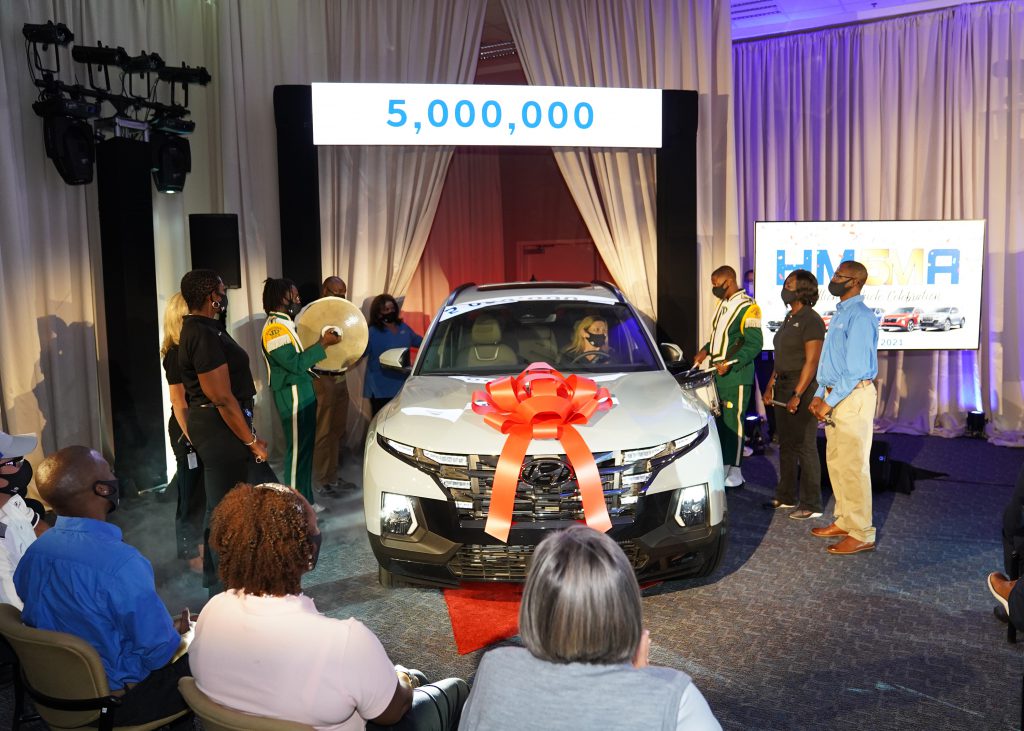 The ceremonial 5 millionth vehicle, a Hyundai Santa Cruz Sport Adventure Vehicle, was revealed in auto show style at HMMA’s training center. The Santa Cruz recently began production at HMMA on June 22, 2021, and signified many firsts at HMMA: the first open bed Hyundai vehicle built for the North American market, the first time a Hyundai vehicle has been launched at a U.S. facility before being assembled in South Korea, and the first time HMMA has produced five vehicles on the same assembly line.

“Reaching today’s milestone in HMMA’s storied history in Alabama would not have been possible without the energy and enthusiasm of our valued Team Members, the dependability of our supplier network and unwavering support of state and local governments,” said HMMA President and CEO Ernie Kim. “I also want to thank Hyundai Motor America and the dealers in North America for their efforts to grow the Hyundai brand and sales of HMMA vehicles.”

“Hyundai Motor Manufacturing Alabama is an integral member of not only the River Region, but the entire state of Alabama. I’m thrilled to celebrate the five millionth vehicle rolling off the line in our great state. Alabama has become a major player in the automotive industry, and today’s milestone proves we will maintain our status as an industry leader. Congratulations to the HMMA family on an incredible achievement!,” said Alabama Governor Kay Ivey.

“I am so pleased to celebrate with the team members and leadership of Hyundai Motor Manufacturing Alabama for having produced 5 million vehicles right here in Montgomery,” said Rep. Sewell. “Over the last two decades, HMMA has become an essential part of our community, and I applaud their continued commitment to growing our local economy and creating jobs for hard-working Alabamians. I wish them success on this momentous occasion and for years to come!”

“Congratulations to Hyundai Motor Manufacturing Alabama on the tremendous accomplishment of producing 5,000,000 vehicles here in Montgomery. We pledge to help HMMA and the supplier network achieve continued success. It is an honor to have forged a lasting partnership with Hyundai, and we are grateful for their sincere commitment to our community,” said Mayor Steven L. Reed.

“It has been over 15 years since Hyundai realized our shared dream of opening its first North American manufacturing facility in Montgomery, Alabama. Tremendous success has followed, and we want to take a moment to celebrate the amazing achievement of producing five million vehicles in Montgomery, and the incredible team members that have made it possible.  We are honored to be Hyundai’s home and part of the Hyundai family,” said Elton N. Dean, Montgomery County Commission Chairman.

HMMA recently completed a plant expansion project to support the addition of its fourth and fifth models, the Tucson and Santa Cruz, to HMMA’s product mix. The addition of these models further enhances HMMA’s ability to adjust its vehicle production with market demand and stay competitive in the ever-changing automotive market.