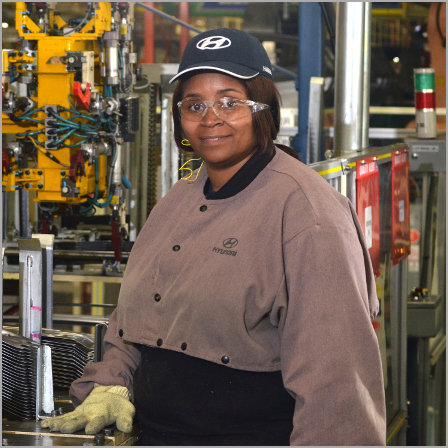 Team Member Alicia Phiffer is approaching her tenth year at HMMA, having worked in the weld shop since February 2006.

“When I first came to Hyundai, we were building about 200 cars a day, but some days ran faster than others,” she remembers. “Everyone was like a big family and we all worked together to make sure we could keep the line running.”

Alicia’s first job as a Team Member was working the right side line, where she stayed for almost a year before moving to the left side. “Back in 2006, working the side line in the weld shop meant you would pick a part for the robot and then position it for the robot to do the welding,” she recalls. “On the right side of the car that was pretty simple, but then on the left side you had to also make sure the fuel fillers were loaded and install the combi lamp, too.”

Nine years later, Alicia is now working on the roof sub line where the roof rails are welded, and the process is a lot more advanced than in previous years. “Now, instead of holding the parts to be welded ourselves, we load the roof rails onto a shuttle for the robot to pick up,” she explains. “The robot positions them and we monitor the process, making sure there are no bad parts being sent to the robots and that the robot is welding everything correctly.”

Alicia says she has gained a wealth of knowledge during her time in the weld shop, and she loves working on roof sub. “I feel so confident in my job now,” she says. “I have enough experience that I can handle most problems I see or robot faults that happen, but I also know that I will be able to learn how to resolve any new faults I haven’t seen before.”

While so much has changed during her time at HMMA, Alicia says there is one notable thing that has remained the same. “The family environment is still the same as it was nine years ago,” she says. “I have met new people and learned about so many different cultures, and I’ve been able to provide for my family at home, all while feeling like I’m part of the big Hyundai family, too.”