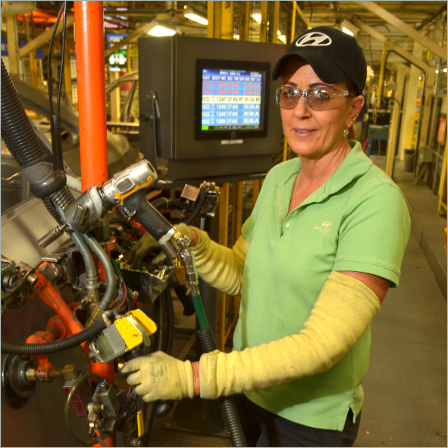 Donna Lenning works on the BC1 line in the weld shop. Her 10-year anniversary with HMMA is quickly approaching as she became a Team Member in November 2005. Donna says she had some experience in automotive and manufacturing before she came to HMMA, but she still had quite a learning curve to overcome in the weld shop.

“I came from a plant that made seat adjusters, and I’ve worked in plants all my life, but HMMA is bigger with lots more people,” she says. “When I first started I spent just two or three days training and then I had to jump right in putting on fenders.”

Donna says it took about a month before she really felt confident doing the work on her own. “There were so many things you had to get just right,” she remembers, “like making sure the gap and flush were correct and then adjusting them if not.”

Back in 2005, Donna says the biggest challenge in her eyes was that the BC lines were constantly moving but the assembly line floor was not, so Team Members had to walk along to complete their tasks. “It was very difficult to do those processes while walking beside the car,” she recalls.

A huge improvement came when each station was equipped with a button to press once the task was finished. “Now, the cars all shuttle forward, then we complete the process while standing in place and press a button when our task is complete,” Donna says. “Once all the buttons have been pressed, the cars can shuttle forward again.”

Donna knows these types of plant improvements make everyone’s job a little easier, but it’s the Team Members themselves who can really step up and make a difference. “Be committed to doing your best at your job,” she says, “and always be there to help others when they need it.”