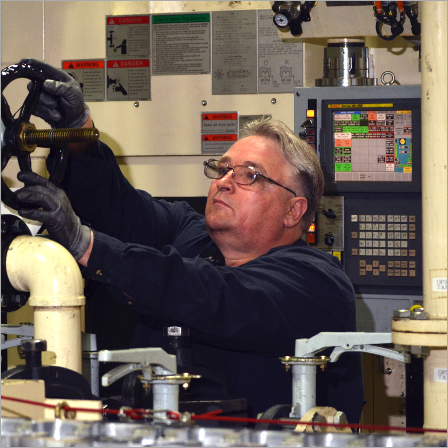 Engine maintenance Team Member John Hall has been at Hyundai since October 18, 2004, when he was first hired to work in the engine assembly department.

“When I started, we weren’t building any engines yet,” he remembers. “All the equipment was still being installed, and we were checking the different workstations for safety and deciding where parts should be stationed on the line for assembly.”
Gradually, the engine shop ramped up production, and soon John found himself with an opportunity to move from production to maintenance.
“I had 25 years of experience in maintenance previously, so I was excited to get a maintenance job here,” he said. “It’s given me a chance to learn a lot about automation and logic with all the different types of robots we use.”
In his 10 years on the Hyundai team, John has been a part of the many milestones HMMA has achieved, but he says one stands out in his mind as the most exciting.
“When we built our millionth car, I was so proud,” he recalls. “If you build a million cars, that means someone had to have bought a million cars! Knowing there were a million people out there driving a car I helped build gave me a super sense of pride.”
John’s not only proud of the cars he builds, but of how working at HMMA has enabled him to provide for his family in new and better ways. “I’m able to have great benefits for my family, and we’ve been able to buy a nice home in a safe neighborhood,” he says. “I don’t feel bogged down by debt and I feel secure for the future.”
John knows that the future is bright for Hyundai and its Team Members. He says, “If we continue on our current course, the sky is the limit for how great we can be!”