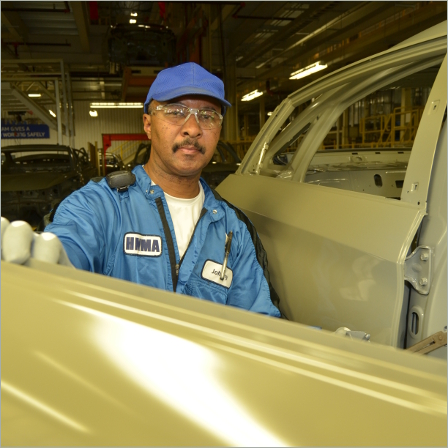 Paint shop team leader Johnny Shaw joined the HMMA family 11 years ago, in February 2004. At that time, he says his days were spent learning the ropes to prepare him for his job in paint.

“When I first started, we spent every day for about the first month down at the Training Center just learning the basics,” he says. “After that, we went to Korea for a month of hands-on training at an assembly plant there.”

Johnny says that experience was very valuable and enabled him to come back with the knowledge he needed to start working in paint repair. “We worked in dent repair, inspect and polish, and moist sand,” he recalls. “The training was great, and so was having the chance to see Korea and experience another culture.”

Upon returning from Korea, Johnny was sent to Trenholm State for more auto/body repair training, and then finally was able to take his place on the assembly line.

“When we first started working on real cars, we were building just three or four cars a day,” he remembers. “They slowly ramped things up, and we were feeling really proud of ourselves when we first started building 100 cars in a day. There were no more big gaps in the line and there was very little down time, and we knew we were really building cars.”

That, of course, is nothing compared to the 1,550 cars HMMA now builds each day, but Johnny says that early experience is what has made his team so successful now.

“Reducing overall paint defects is the one thing that has made the biggest impact on our day-to-day operations,” Johnny says, “and we’ve been able to do that through Team Member experience and learning from any past mistakes.”