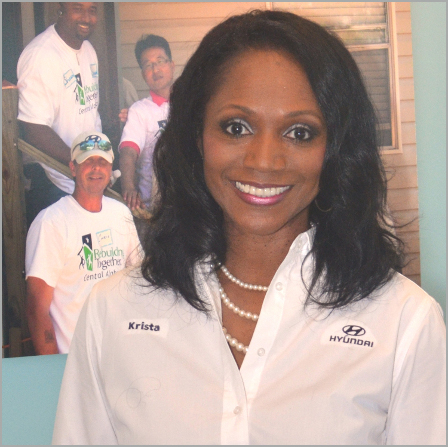 Krista Hawkins is a community relations specialist in HMMA’s public relations department. She joined the HMMA team in early 2005 as a contracted HR recruiter, and then became a PR Team Member later that year.

“When I first became a Team Member I was a protocol specialist which meant I gave plant tours and did other projects in the visitor center,” Krista says. “For my very first tour, a group accidentally showed up on the wrong day and the rest of the PR team was at the training center. I was nervous, but I put them on the tram and gave them the best tour I could.”

“When I started in community relations it was my goal to have those two functions working together so that HMMA was sponsoring activities as well as being present for the events. Today, that is a reality and HMMA’s presence in the community is much more visible.”

Krista says over the years HMMA’s community relations initiative has grown exponentially and it’s due in no small part to Team Member involvement.