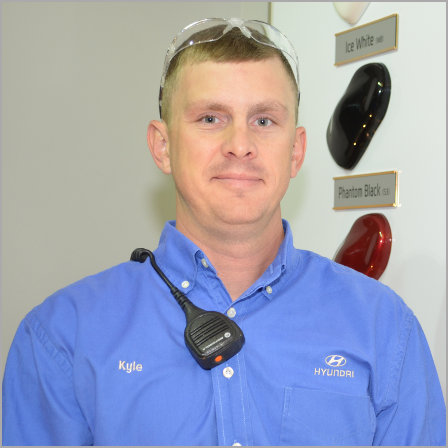 Kyle Waites joined the HMMA team in January 2005 as a production Team Member in the paint shop on the sealer deck.

“Back then we were running pilot vehicles, and only about five a day,” he recalls. “We did a lot of cleaning and a lot of waiting, and for a few months we practiced on dummy units during the breaks between pilot cars.”

That practice paid off as vehicle production ramped up and the number of cars on the assembly line began increasing.

“There were days we ran around 90 units and it was astonishing,” Kyle says. “The day we broke 100, I was amazed at how it was possible. Before that I could never really envision that kind of capacity.”

In his 10 years at HMMA, Kyle has watched production ramp up from 5 cars a day to over 1,500 a day, all while he has seen his own career flourish as well.

“I became a team leader in November 2005, then a group leader in 2008, an assistant manager in 2011 and then a manager in 2012 when the third shift was added,” Kyle remembers. “Having these leadership opportunities has been the most rewarding part of my experience at HMMA because it gives me the opportunity to develop other team members and help them reach their own career goals, too.”

Kyle says the past 10 years have not only impacted his personal experience, but he’s seen how the high-quality vehicles being built at HMMA have had an even greater influence on Hyundai’s global identity.

“In 10 years I’ve seen the transition and impact that Hyundai as a brand has made in the marketplace,” he says. “HMMA has made a huge impact on Hyundai’s ability to establish a positive brand image here.”

Ultimately, Kyle says he’s proud to work for a company where he knows the sky’s the limit. “This job takes commitment,” he says, “but there are always new opportunities.”